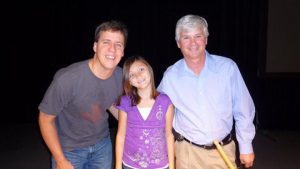 Best selling children’s writer Jeff Kinney, author of the Wimpy the Kid series of books and movies has named Sight Savers America his “Charity of Choice,” a designation which prompted Google to donate funds to be used for the purchase of low vision aids.

Kinney learned about Sight Savers through a newspaper article and a precocious kid named Brooklyn.

Brooklyn is a 4th grader from Huntsville, Alabama, who like millions of other young readers loves Jeff Kinney and his unlikely hero, Wimpy the Kid.  However, unlike most Wimpy fans, Brooklyn lives with the challenges of low vision due to a congenital optic nerve disease. She can’t read her favorite books or do most of the things kids her age take for granted.  That was the situation until a couple of years ago when Sight Savers America stepped in to present Brooklyn with a wonderful new vision aid, a Closed Circuit Television Magnifier (CCTV) which enlarges objects up to 75 times.

After training on the CCTV, Brooklyn was quoted in her hometown newspaper, The Huntsville Times, as saying she was most looking forward to using it to read her favorite Wimpy the Kids books.   It didn’t take author Jeff Kinney long to hear about Brooklyn’s story.

“I have a Google alert,” said Kinney, so that’s how I saw the story.  After I read it, I was very moved by it. I wanted to send her some signed books.  The problem was how to find her?  I called the newspaper,” Kinney continued, “and they gave me her parents’ name.

With that information in hand, and a little bit of investigative work through Facebook, Kinney had the information he needed. When her phone rang just one day after the article appeared, a very surprised Brooklyn found her favorite author himself on the other end of the line. Kinney thanked her and told her that he was honored she was reading his books.

That initial phone call was just the beginning.  Kinney was soon to learn how very much CCTV’s change children’s lives. During a recent book signing tour in Birmingham the author and his self proclaimed number one fan got to meet face to face.  Kinney even invited this precocious ten year old to share the stage with him at the Birmingham Jefferson Civic Center.  Without hesitation, Brooklyn took her place at the podium to tell the audience all about her CCTV, Sight Savers and how this new equipment has changed her life. She also encouraged other kids to read and become writers because “writing books is really cool.”

“I was very touched,” Kinney said.  “I didn’t even know equipment like what Sight Savers provides was out there.”

Since that time Kinney has kept in touch with Sight Savers’ kids, even donating his books on tape to a little boy who had lost his vision.